Hello Survivors!
2022 was a total blur. Now that the winter holidays are approaching, we’d like to take a moment and look back at what happened throughout the year.

DayZ received 4 updates this year. Our goal was to keep the game engaging for new and experienced players alike. We were once again able to release all of these updates on schedule, and to include some pretty big additions in terms of assets and features. While all this was happening, the team and its processes underwent major changes as part of the continuous restructuring in preparation for team growth and future challenges.
Another aim of ours was to stabilize the game. The stabilization process included a more in-depth look at long-standing issues regarding stability, exploits, and recurring bugs. We balanced these fixes with spectacular themes in every update to generate more attention and continue supporting our marketing efforts. 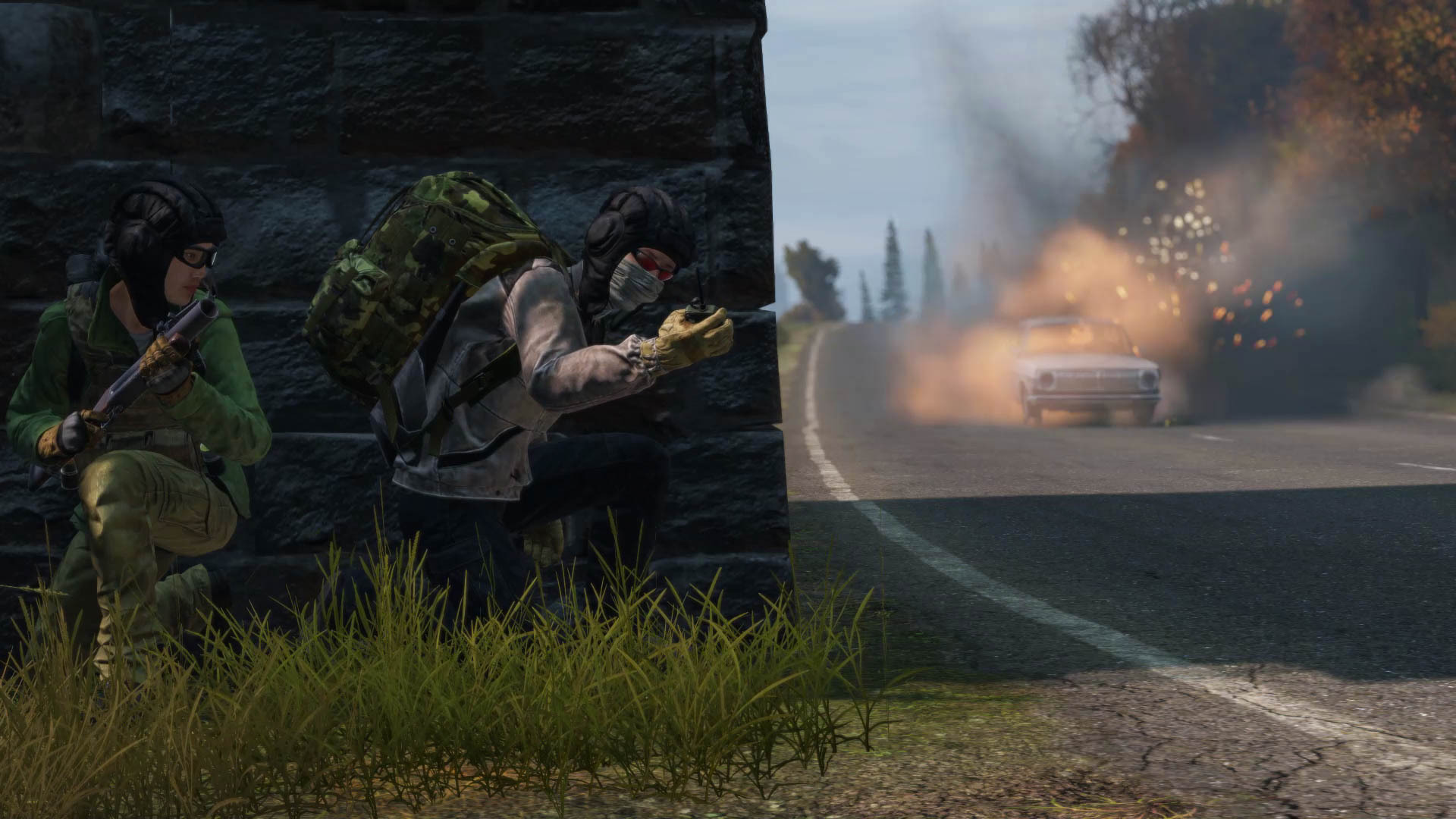 Update 1.16 kicked the year off with a clean sweep that was meant to stabilize the build, supported on asset-side by the firepower of the Bizon SMG. Meanwhile, update 1.17 was all about crafting. It introduced improvised bone spears and knives, as well as a very popular mummy outfit made from rags. Update 1.18 set out to define an explosive summer season with both industrial and self-made explosives, and a grenade launcher. Finally, the year culminated with update 1.19, which provided a significant update to our Livonia DLC, including the first large underground area in the game. We also introduced the M1025 Multi Purpose Vehicle, which was supported by an update to our vehicle simulation and character collision that fixed tons of bugs and exploits in the overall gameplay.


TELLING A TALE OF THE APOCALYPSE
DayZ is all about the survivors and their paths in this post-apocalyptic world. This is why our recent trailers have focused on telling these stories and how they are interconnected and impacted by large scale events. With update 1.19, we were finally able to finish the first major story arc around the character named Hannah. 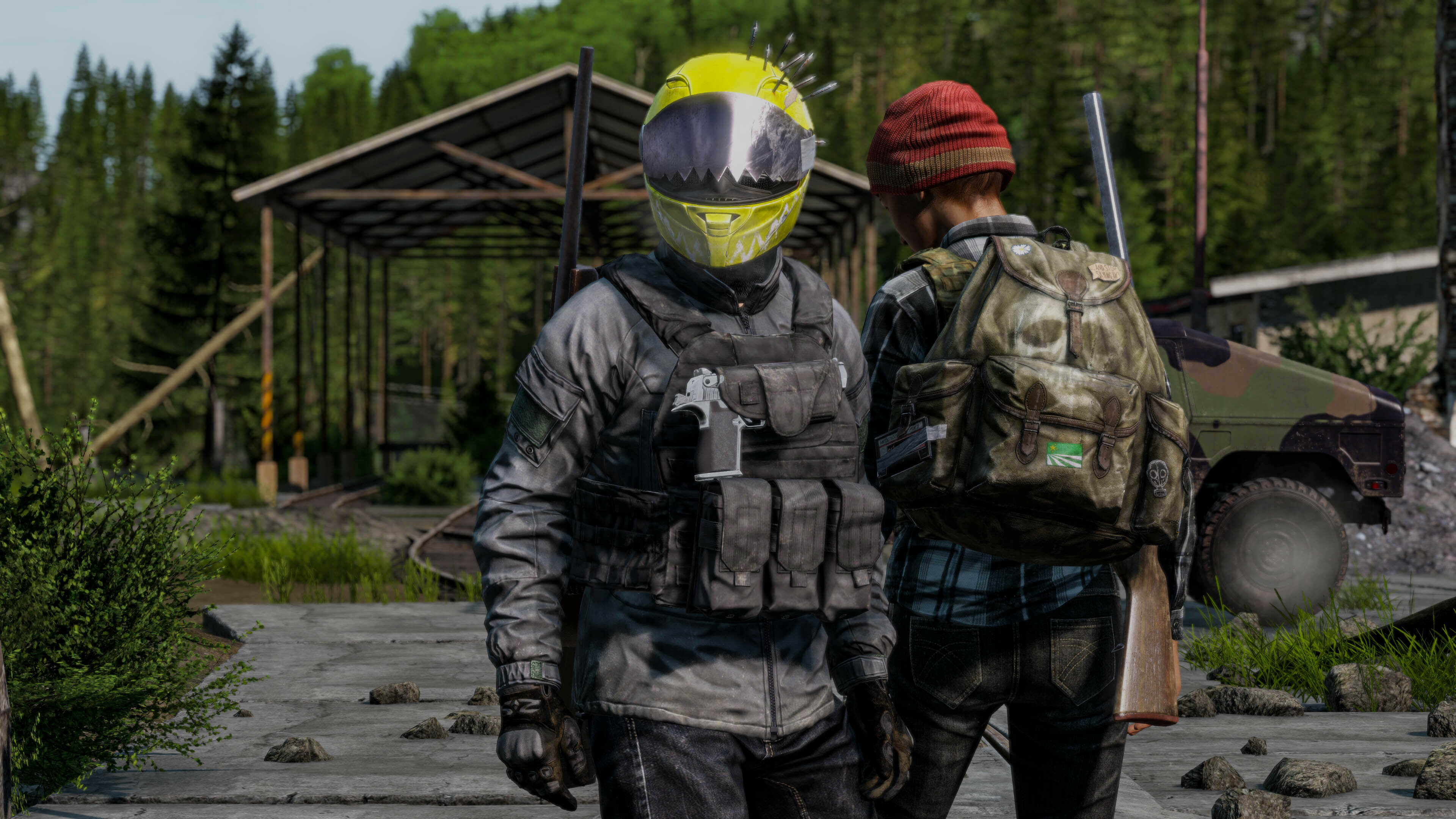 Hannah was introduced in our previous release trailer back in 2019, when she was ambushed and robbed of her backpack by two bandits with motorcycle helmets. She got her revenge later and retrieved her possessions. A battle-hardened Hannah returned in the trailer for update 1.14, where she witnessed what appeared to be a trigger for a barrage of mortar strikes across Livonia and Chernarus that were infused with toxic gas. Another mysterious character appeared during this turbulent period, this time in the form of the mysterious Yellow King. A bandit with a scarred yellow motorcycle helmet appeared, hunting down survivors while searching for something.
The hunt culminated in our trailer for 1.19, when the masked bandit tracked Hannah down at an abandoned underground ammunition storage, which appears to have found (and lost) new inhabitants since the outbreak. After retrieving [----] hidden in a safe, Hannah was ambushed by the Yellow King. She managed to fight him off but lost her lucky backpack in the process. 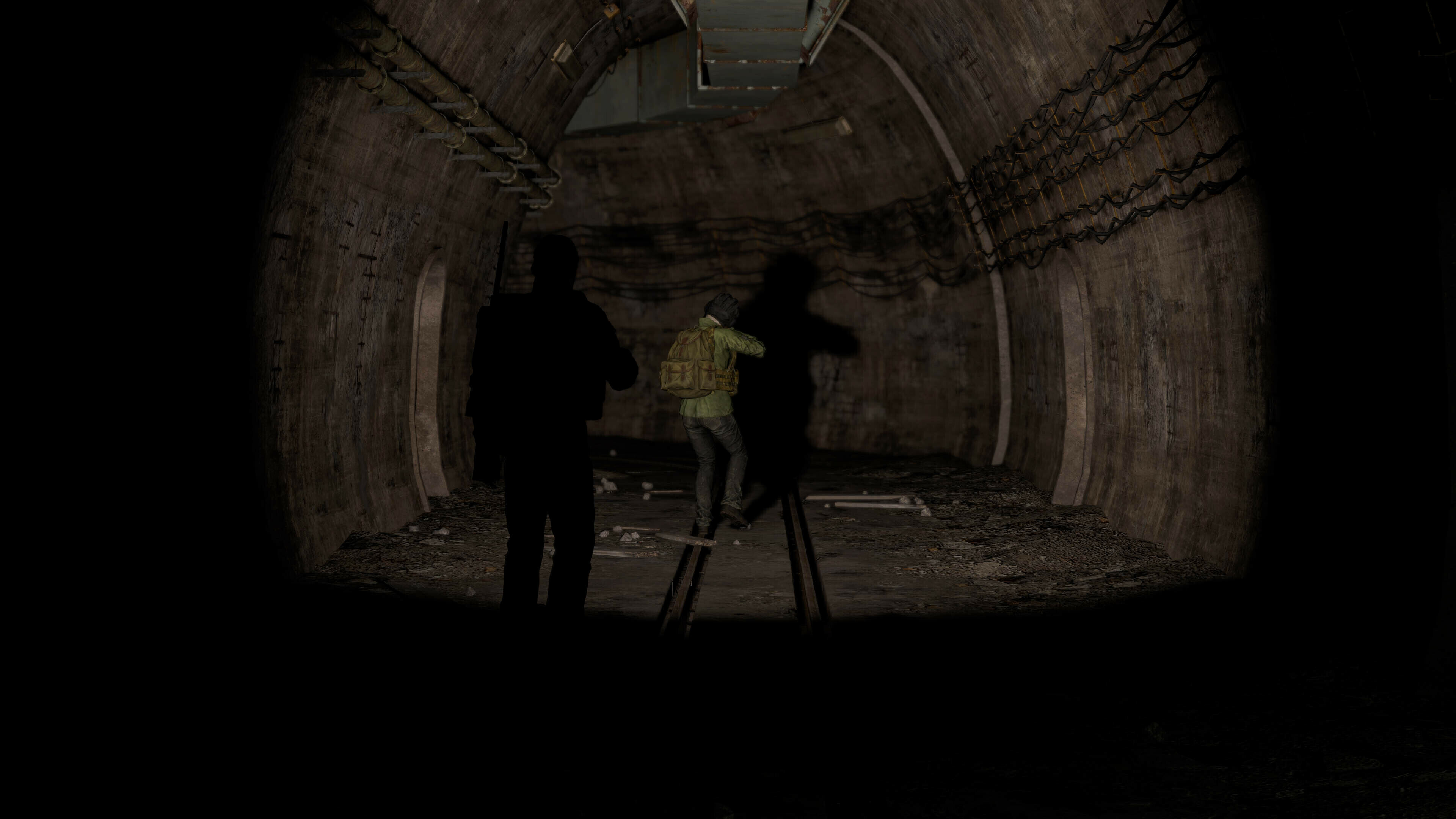 A wounded Hannah escaped from the underground and drove away, but the fate of the mysterious [----], as well as her pursuer, remains unknown...
Huge props to Scott Bowen and the entire video team for pulling off such amazing storytelling!

OLD AND NEW FACES - PUSHING THE LIMITS TOGETHER

We received increased support from both inside and outside the DayZ team in 2022.
While one team member left, the year started big with the return of our former Lead Programmer. Also additional new programmer joined the team to increase our implementation capacity and tackle complex topics.
Most recently (Q4), we expanded the ranks of our programmers once again, an established modder known for his participation in some of DayZ’s most popular mods. 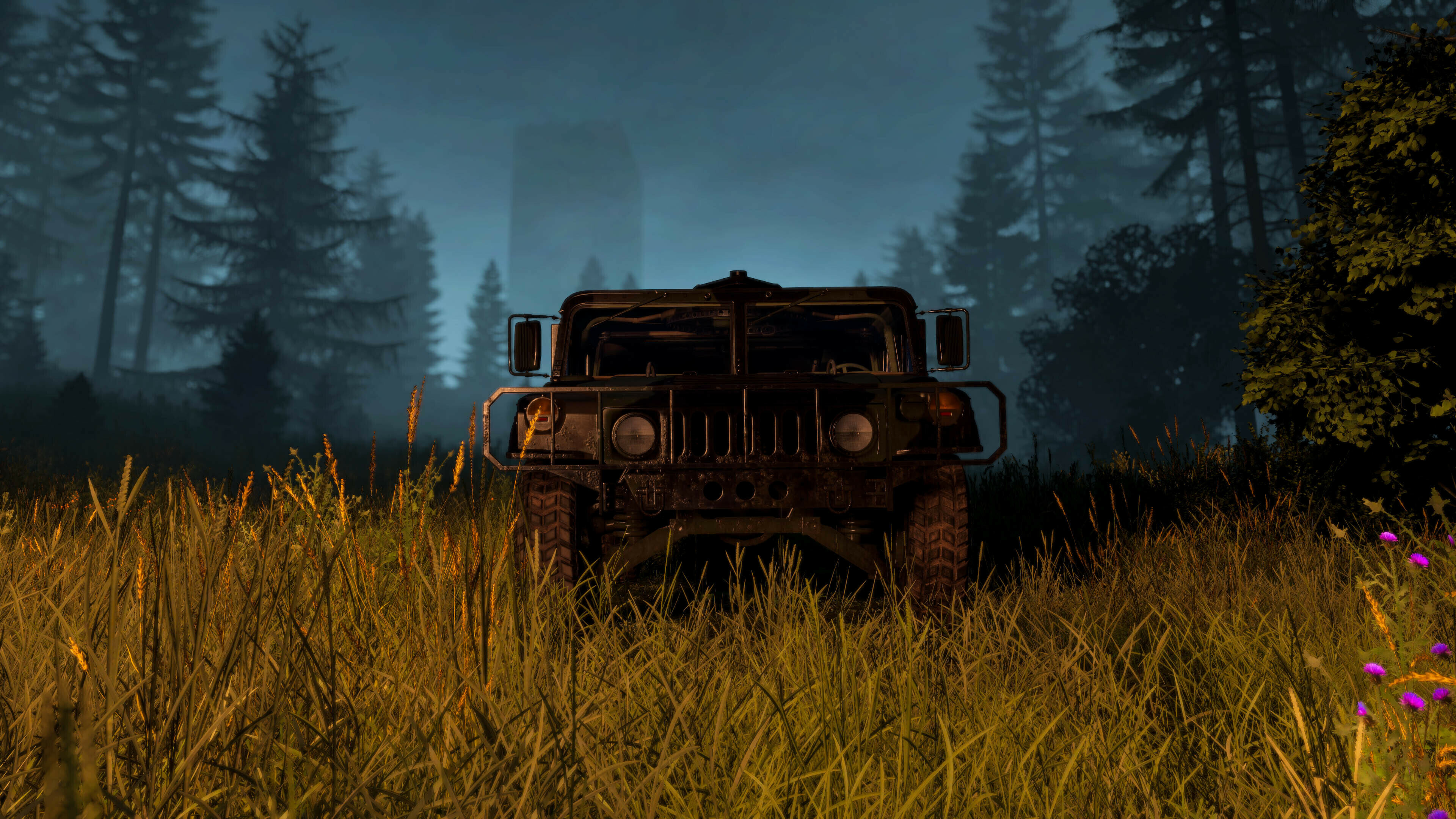 Aiding our design team we have a new Designer, who joined us from Publishing QA.
We received reinforcements during the second half of the year. Joining us was DOJ, a long-standing DayZ modder who further added to our terrains as an Environment Designer. And let’s not forget a new Artist with thriving experience from one of our other titles (Vigor) who’s pushing us with asset production.
By the way, we’re still on the lookout for experienced talent in design and art!
We were able to accomplish the enormous scope of updates in 2022 thanks to our cross-project teams, Combined efforts from all our studios, which helped create Livonia’s underground facility and port the vehicle simulation from the lastest version of Enfusion to DayZ. The audio and animation teams also stepped up their game and provided invaluable help.
As usual, DayZ as a live service could not exist without the continued support from our friends in Deployment, Backend, Marketing, Platform Support, Publishing QA, Operations, and IT. 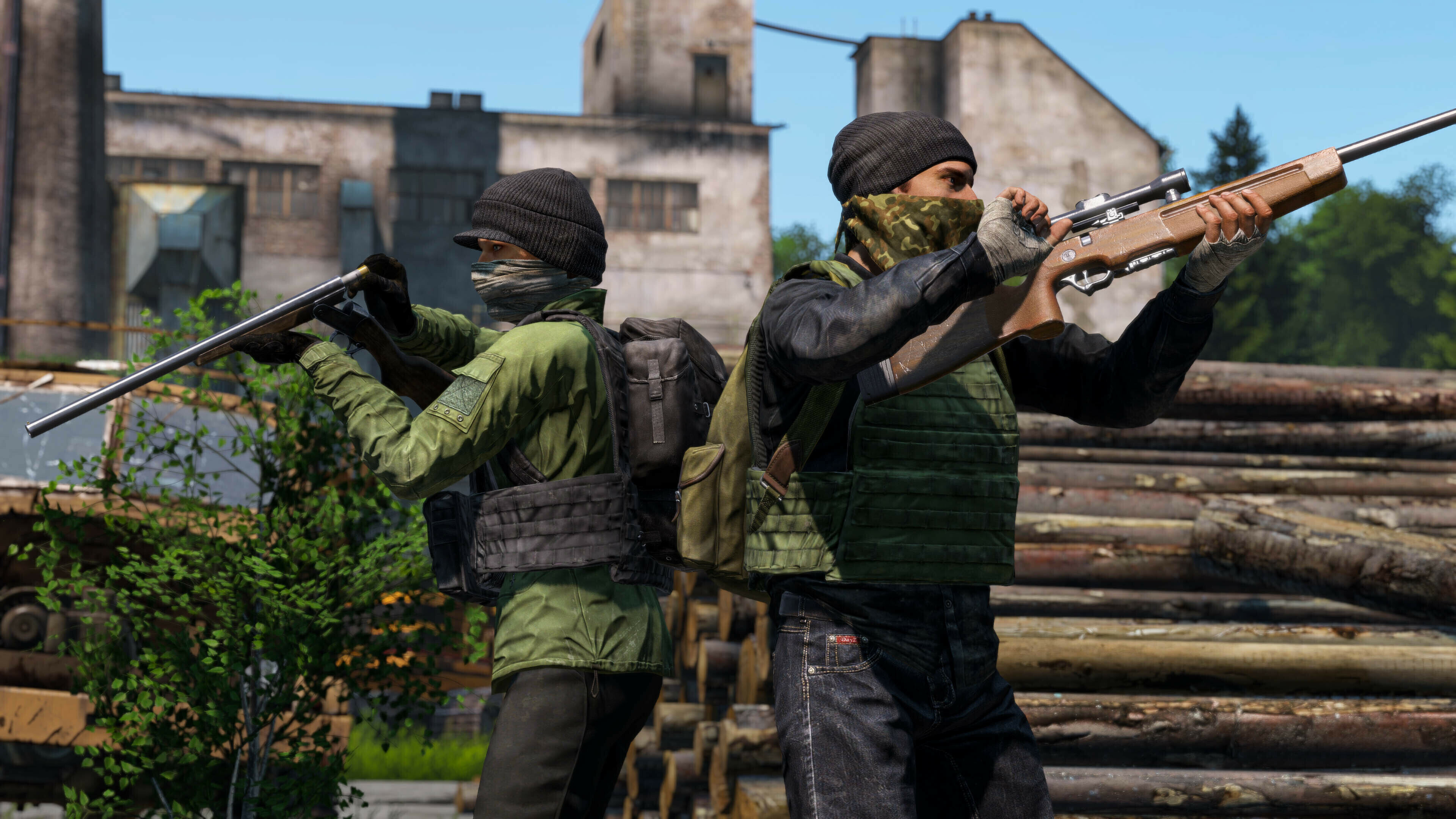 While we do try to highlight community content and success in our monthly community spotlight. We are well aware of contributions that don't get as much attention due to sheer amount of amazing work.
This year the DayZ team got more involved in community events that builds relationship of our team and player base (Including our Creative Lead Adam Francu)
Modders, community server hosts, content creators, chat moderators, social leaders, event organizers, forum admins and Proudfoots - "Proudfeet!"
We aim to expand more on existing features to enrich community led content.
A huge special thank you to all!

What's next?
2023 is going to be a very interesting year for the DayZ team and Bohemia Interactive as a whole. DayZ currently competes toe to toe with our other well know franchise Arma, and we are very aware of our responsibility in continuing the game’s success. While plans are setting and investigations are a go, We are unfortunately unable to provide more information at this time.
We look to giving more clarity of 2023 development in our - DayZ in 2023 Article scheduled for Q1 of 2023.
Furthermore you can check TopeRec's Interview with Scotty for some sneak peaks we would like to achieve.

The DayZ Team wish you all A Merry Christmas or happy Holidays and a Happy New Year
Bring on 2023!

Most Played
https://store.steampowered.com/sale/BestOf2022?l=english
Click here for the source of this article RSS Feed